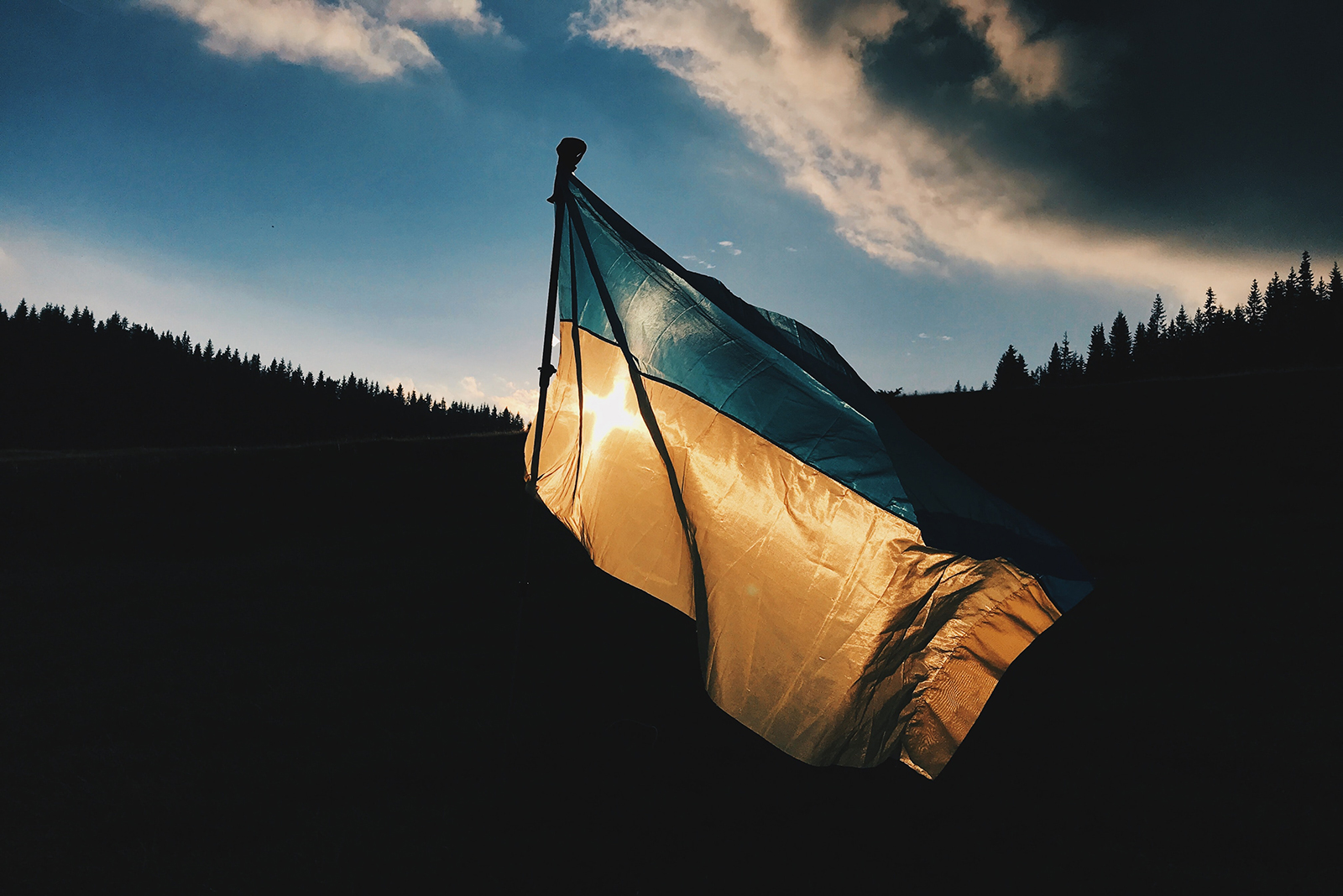 A Christian’s Response to the Tragedy in Ukraine

By Lucas TurnerFebruary 25, 2022No Comments

How to make sense of war? Why do nations and their armies commit to violence against one another? What is the role of the Christian Church in the course of such events, and is there a “right” side for us to take? Let us take a look through the familiar method of Observation, Interpretation, and Application.

While recognizing long-lasting conflicts in the Middle East, Southeast Asia, and Africa that have continued for the past several years and decades, it is also true that the years since the fall of the Soviet Union have been some of the most peaceful in international affairs in modern history. That’s why last night’s news of an official Russian invasion of Ukraine is so shocking and painful to see. For a significant part of the world’s population, this is the first act of one nation’s aggression toward another they’ve witnessed. Hearing news reports of terms such as “front line,” “casualties,” and “war” is startling, especially since they are not coming from our history books but our screens. The modern age is no longer an escape from the violence and strife of our historical past.

Global leaders have uniformly condemned Putin’s actions against the Ukrainian people. From Ukraine’s President Volodymyr Zelensky to NATO Secretary General Jans Stoltenberg to American President Joe Biden, the message has been clear- this invasion is the impingement of one nation’s sovereign rights by another. A surprising voice of clarity and moral certainty came from Martin Kimani, Kenya’s ambassador to the United Nations. While stating the transition of European empires into individual states within the African continent, Kimani clearly voiced the main concern at hand:

“We rejected irredentism and expansionism on any basis, including racial, ethnic, religious or cultural factors. We reject it again today. Kenya registers its strong concern and opposition to the recognition of Donetsk and Luhansk as independent states. We further strongly condemn the trend in the last few decades of powerful states, including members of this Security Council, breaching international law with little regard.”

Military action in Ukraine is likely to lead to significant collateral damage in term of lives lost and property destroyed. Ukraine is roughly the same size as Texas, with a population of over 45 million people. At least four cities have populations of over 1 million citizens, meaning the presence of Russian troops will incur significant casualties of non-combatants.

Finally, questions about the world’s commitment to the situation are worth answering. While not a member of the North Atlantic Treaty Organization, Ukraine has often depended upon military and political support from the West as an independent nation. The shortest answer for why that is the case is that after the collapse of the Soviet Union in 1991, newly independent Ukraine found itself the third-largest nuclear power in the world. In exchange for giving up its nuclear weapons, Western and Russian leaders guaranteed Ukrainian independence and sovereignty.

The much more difficult questions, especially at the outset of a military incursion, is to best make sense of the facts on the ground. An important thing for all to remember is that this war will be fought differently than any other in history. While much of the military technology being used on the ground is familiar, the widespread existence of cameras and cellphones will change how the rest of the world sees it. Similar to the nightly images of combat and wounded soldiers on their televisions, constant updates from social media, including graphic and shocking images, will quickly flood the information space. An important thing to remember is just how easily images and videos can be distorted to project a specific story. And as always, there will be bad actors who use the tragic suffering of others around the world as a way to spin more influence for themselves. Followers and personal influence is more important than speaking the truth, or not even speaking at all. Just as Pilate resignedly asked “What is truth?” the path of least resistance would be to simply accept all things we see or hear as verified and trustworthy. But the task of Christians at all times is to discern, give greater emphasis, and support to those who use the truth as a firm footing. Those who use lies as a weapon are no ally and no dependable source of information, and we should always caution our hearts and emotions when seeing sensational images online.

Another important issue for our church to consider is the personal cost borne by so many of our congregation. By its simple location, GBC always has a significant military population within its membership. A large-scale military conflict very likely affects our own men and women, as deployments and the reality of war become much more tangible. The events today are not some hypothetical situation that we have the luxury of merely thinking and talking about. There are real consequences, and we do not take those lightly. As long as GBC exists, we will bear the burden of separation and anxiety with our soldiers and their families. It makes a strong case for the need of brothers and sisters in Christ to remain close to one another, both physically and emotionally. The strongest feelings our spiritual and physical enemies hope to use against us are that we are alone, forgotten, and hopeless. The way to fight isolation is to seek the company of one another and build each other up (Heb. 10:24), in defiance of what our fleshly response might be at this time.

Finally, those who affirm the sovereignty of God over all things must affirm the sovereignty of God over the nations. In a world where voting is often affirmed as power, it is easy to assume that we have a certain level of autonomy in the choosing of our leaders and the conduct which flows from it. While this is true in a sense, it is important to remember that God is the ultimate King, and his rule is not something we think about as happening in the future, but in real time, even today. He places kings and rulers in their seats of power (Dan. 2:21), and the hearts of kings are as a river in God’s hands (Prov. 21:1). This is not a philosophical or theoretical thought meant to comfort, but a Biblical truth that is meant to strengthen our confidence in the events of our days.

”The minimum course of action for every Christian is to Pray, Think, and Hope. The first, easiest, and most urgent task at hand is to pray. Pray often, pray fervently, and pray dependently. Pray as if it makes a difference, because the LORD assures us that it does.

So what can we do? What must we do? The minimum course of action for every Christian is to Pray, Think, and Hope. The first, easiest, and most urgent task at hand is to pray. Pray often, pray fervently, and pray dependently. Pray as if it makes a difference, because the LORD assures us that it does. Pray for the protection of civilians in Ukraine and any other areas where fighting may spread, especially for the most vulnerable of those populations, such as the elderly, the sick, and children. Pray for the churches in Ukraine, our brothers in sisters in Christ for whom suffering is real and instant. Pray for those who make the incredibly difficult decisions which are needed at this time, such as when to send a message versus when to send soldiers. Pray for those families of soldiers on a new front line, who are experiencing the worst feeling in the pit of their stomach this very moment. Every report of people killed or wounded in battle, even enemy combatants, is a family shattered by grief and questions of “why?” And for those families who are fortunate enough to have their men and women return, the entire conflict will still be a tortuous period of waiting and praying that no one notifies them of a tragic loss. Finally, with a faith enhanced by the knowledge of our God’s ability to work miracles, pray for a rapid change of course. Pray that those men and women who have made the decisions which led to the first major European shooting war in Europe will see the folly of their course, to recall their forces, and to seek reconciliation and accountability at the international level.

Christians must seek truth and righteousness, especially when the consequences of getting it wrong result in widespread conflict and suffering. The claims used to justify the Kremlin’s actions do not meet the criteria of Just War Theory first attributed to Augustine, but that does not excuse us from doing our own homework before supporting or opposing military action. We must ask if condoning a violent conflict would increase or decrease the total amount of evil and suffering. And whatever our conclusions, we bear the burden of engaged opposition or support until state on state violence is concluded. Not doing so puts our conscience in dangers becoming a casualty to indifference, one of the common faults of our brothers and sisters throughout history.

But finally, we must look beyond the current and even short-term future. As followers of Christ, we have the eternal horizon, a view toward heaven. When he taught about the end of the age on the Mount of Olives, Jesus reminded us to not be anxious about rumors of wars and even wars themselves (Matt. 24:6-14), but to remain fixated on him. Even if the suffering becomes real, the end result of all strife is an eschatological proclamation of the universal reign of God, accomplished through the gospel of Jesus Christ. Veterans of all wars speak of the wonder of silence, when the bullets stop whizzing by and the bombs stop falling from the sky. But the ultimate end to wars and conflict is not silence, but the worshipful proclamation of God, the sovereign king over all creation.

Gather With Us This Sunday

Here is what you can expect:

1. Same Sermon
We will follow a slightly shorter order of worship, with the same sermon.

2. Free Sunset
Sunsets are beautiful in Texas. This will remind us of God’s glory!

3. Masks
Masks are required for volunteers, for attenders indoors, and for any person that can not maintain six feet of social distance from non-household members. Masks reduce the spread of the virus. (Killeen Face Covering Directive, Texas Governor’s Directive)

4. Social Distance Throughout
We will ask you to maintain social distance from non-household members and refrain from shaking hands and hugging. I know this is hard for a lot of you (it is for me) but you still have freedom to engage in these things elsewhere.

5. Bathroom Hygiene
Lobby bathrooms will be available. Masks must be worn to enter the building. We will ask you to use hand sanitizer before going into the bathroom, and only enter one person at a time (and, of course, wash before exiting).

Drop us a Line!